Dear Valued Patient, our office is OPEN and We’re Here for YOU!
We never closed during the COVID-19 shutdown, we just practiced safety protocols.

At Optometric Associates, the health and safety of our patients and employees is our top concern. Our office has a long-standing practice of disinfecting all areas of our office throughout the day, and all clinic areas are disinfected prior to every patient seen.

Our team is committed to the eye health and well-being of our patients and our community. Our office is providing ALL routine eye care services, including eye emergency care, glaucoma management, dry eye management, contact lens examinations, glasses examinations, medication refills, eyeglass repairs, and the dispensing of contact lenses.

Please contact our office at 717-354-2020 or text us prior to your visit to communicate your needs. Because we are running on a slightly reduced clinic schedule, please double check our hours of operation before visiting. Feel free to contact us with any questions. Thank you. 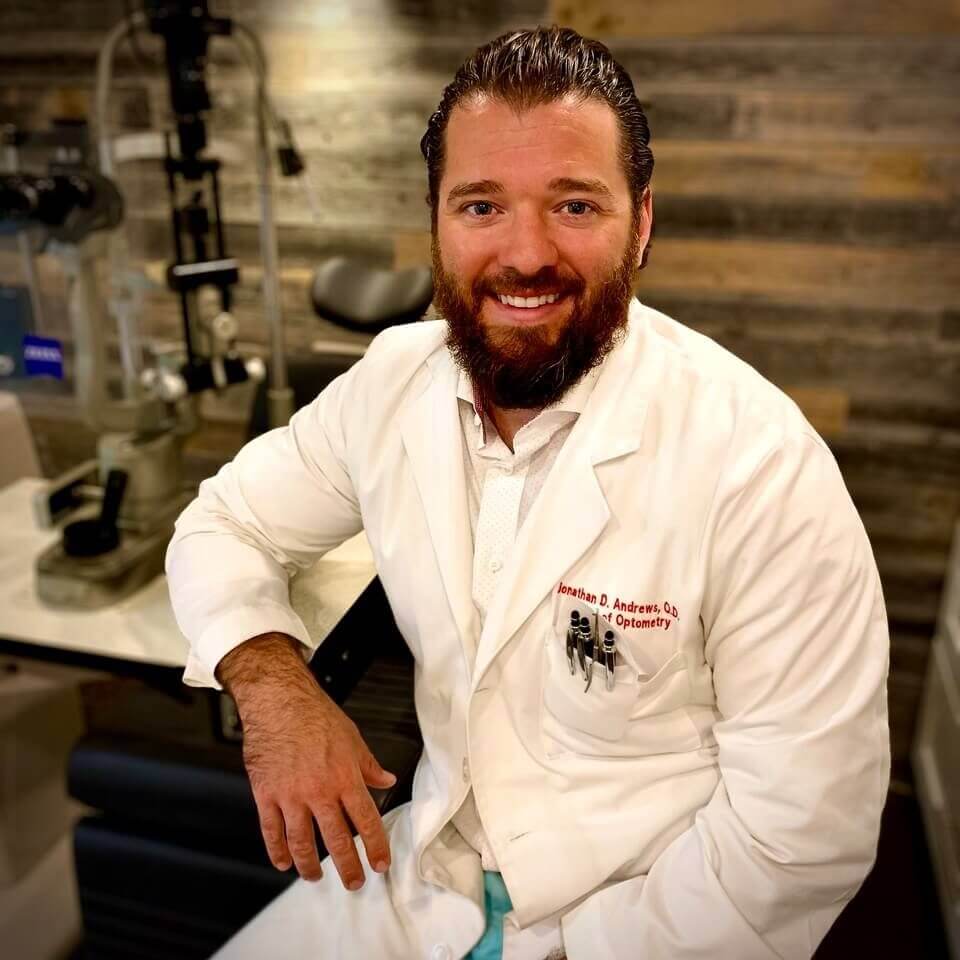 Dr. Jonathan Andrews is a Pennsylvania native and alumnus of both Indiana University of Pennsylvania and The Ohio State University. The son of Dr. Wolfram Andrews, an Optometrist in Lancaster County, PA, Dr. Jonathan Andrews grew up on a small property in rural New Holland, PA. He spent much of his early life shadowing his father and learning the building blocks of optometry.

Upon graduating from Garden Spot High School he attended Indiana University of Pennsylvania. After receiving his Bachelor of Science in Natural Sciences and Mathematics with minors in Chemistry and Physics, he was accepted to The Ohio State University College of Optometry.

During his professional collegiate career at The Ohio State University, he spent his final year of training under nationally renowned eye doctors at locations in central and northern Ohio, Kentucky, Vermont, and Pennsylvania. This included a three month rotation with the Department of Veteran Affairs Medical Center in White River Junction, Vermont, and a three month rotation with Commonwealth Eye Surgery in Lexington, Kentucky.

Dr. Andrews returned to New Holland to join his father in practice, incorporating the passion for helping others instilled by his father, using the experience and expertise he acquired from training with premier optometric and medical doctors.

Dr. Jonathan Andrews has extensive training in disease management such as glaucoma, macular degeneration, cataracts, dry eye, and diabetic eye care, among a number of other eye diseases. He has a special interest in the management of dry eye and glaucoma, and saving what useful vision a patient might have. He also has extensive training with LASIK and cataract co-management, binocular vision disorders, as well as expertise in fitting difficult contact lenses such as rigid gas-permeable lenses (RGP), scleral contact lenses, and Corneal Refractive Therapy (CRT) lenses.

Dr. Andrews enjoys working with patients one on one in a clinical setting and chatting about his favorite sports teams, outdoor adventures, and experiences.

He attends continuing medical and optometric education conferences and workshops throughout the year so he can continue to provide patients with state-of-the art eye care.

Dr. Andrews frequently donates to various charities, and has participated in numerous health fairs in hopes of educating the public on common eye problems and diseases.

In his spare time, Dr. Jonathan Andrews enjoys spending time with his friends and family. He has an avid passion for traveling, fitness, sports, and being an outdoorsman.

Request An Appointment
Patient Portal
Email Us
You can reach us by email. No confidential information please!

If the office is closed, our eye doctors are still on call 24/7 to help with eyecare & eye care emergencies.