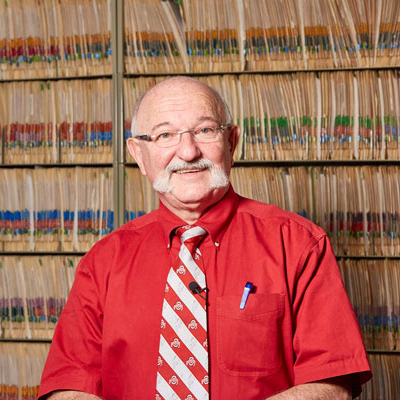 Dr. Wolfram retired from patient care in May 2021, but he will still stay involved in guiding the practice forward sharing his years of wisdom, experience, and knowledge.

Dr. Wolfram Andrews was born and raised in Schwäbisch Hall, Germany. He traveled to the United States at a young age of 18 to begin a new and prosperous life. Settling in Columbus Ohio, Dr. Andrews graduated from The Ohio State University with a Bachelor of Science degree in Mathematics. He played 4 years on the varsity soccer team achieving Outstanding Sophomore status and was selected for the All-Midwest Team during his junior year.

Upon graduating from The Ohio State University, he began his optometric schooling at the Pennsylvania College of Optometry in Philadelphia. During his time in optometry school, he served as vice president of his class all four years, and was also an avid member of the student council. During his fourth year of optometry school, Dr. Andrews completed an externship program at the Baltimore Optometric Center where he treated many patients and became familiar with working in an optometric practice. In addition, he worked with Dr. Albert E. Wascou in New Holland Pennsylvania.

Andrews has traveled extensively to focus on global eye care. He went to Cap Haitien, Haiti in 1976 as part of his education to treat some of the various eye diseases of the Haitian people. In 1984, he journeyed to the Turks and Caicos Islands where he spent about two weeks flying to remote areas to deliver eye care to residents who had not had care in decades. Dr. Andrews enjoys annual mission trips to Guatemala where he provides eye care to missionaries and dozens of locals every year. He continues to serve also on a local level providing free eye exams and glasses to missionaries who are affiliated with his local church.

Once graduated as a Doctor of Optometry, Dr. Andrews decided to pursue his career in Lancaster County, Pennsylvania. He began moonlighting at several practice locations before he and Dr. Jay Stoltzfus opened their own practice known as Optometric Associates. The doors opened in May of 1981 with the desire to offer high quality care at reasonable prices to satisfy their patients needs. Today after more than 33 years of practice at the same location, the goal remains the same.

Dr. Andrews has extensive training in specialty contact lenses, detection and treatment of ocular disease, and geriatric eye care. He enjoys working with patients in a one on one setting and appreciates the small town feel of his practice. Many of his patients have been with him since the practice opened it’s doors.

He is a past president of the Kiwanis Club of New Holland, where he still attends weekly meetings after 26 years of membership. In addition he is a member of the American and Pennsylvania Optometric Associations. He currently resides in New Holland with his wife, Arlene with whom he has five children. He was thrilled to add his son Dr. Jonathan Andrews as an associate doctor at the practice in May of 2014.

When not at work, he enjoys being with his family, working out in the gym, and riding his motorcycle down to the beach. He is also delighted to spend time with his granddaughters, all under the age of two, and his Old English Mastiff named Brutus (after the Buckeyes, of course!).

Schedule An Appointment
Patient Portal
Email Us
You can reach us by email. No confidential information please!
Tour Our Office

If the office is closed, our eye doctors are still on call 24/7 to help with eyecare & eye care emergencies.